Congratulations to the following students on their achievements...

At the National Swimming Titles held in Adelaide last week, Westminster had three students represented and qualified for the national event. Mattias McCarthy (Year 9 Jeffries) participated in the National Multiclass championships and qualified for seven events. Mattias had some fantastic races, finishing in the top seven in a number of them, but the stand out was a silver medal in the 100m Butterfly. Congratulations Mattias.

Reiley Kohler (Year 8 Jeffries) went to Melbourne recently to attend the Victorian Dance Festival (VDF). Reiley auditioned for the Joffrey Ballet in a lunch break and was lucky enough to win one of the four ballet tuition scholarships out of the 132 children who participated in the audition. Reiley won a full two Tuition Scholarship to attend the 2019 Ballet Summer Intensive program in New York City. The summer intensive program is in June/July this year.

Nathaniel Drummond (Year 11 Carter) came home with a Silver Medal for the U17 Beach Relay at the National Surf Lifesaving Competition held recently on the Gold Coast. 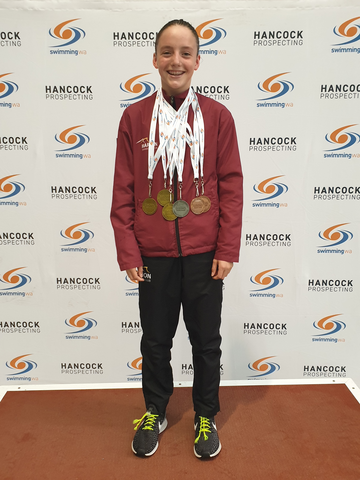 Katie Natt (Year 8 Forder) competed at the WA Junior State Swimming Championships recently. She came away with a several medals, including gold in the 200m, 400m and 800m freestyle races. Congratulations Katie!

Our sailing teams had a great state championship event last week, winning the Open class and the Girls class as well. Both teams will advance to the National Championships in Hobart later this term. Westminster has never had a girls’ sailing team, so our girls made history for the School, and may be the first school to win both divisions in the same year. For the record, the Open team is on a five-year winning streak. 'Westminster 1' was tested a few times and had good fortune to reach the final. The girls won their final series 2-0. We have a chance to qualify both teams to the Interdominion Championships. Congratulations to all involved!

Taylah Stallan (Year 12 Carter) made the semi-finals of the Open Womens' Sprint at the Stawel Gift Athletics championships over Easter. This is a significant achievement, as this is the richest foot race for women in Australia with a high calibre of athletes competing. Well done Taylah.

Bradley Daniel (Year 10 Carter) had success again in this year’s Future Problem Solving competition. Bradley’s scenario, which placed second in Australia at the National Finals in October, has been awarded third place worldwide at the International evaluations conducted in the US. Congratulations Bradley.

Towards the end of Term 1, Amy Liew (Year 11 Forder) was accepted to participate in the Appalachian Spring Project, a creative project run by the Adelaide Symphony Orchestra, which brought together fifteen musicians and six dancers between the ages of fifteen and eighteen to compose and choreograph a new work. This work drew inspiration from Appalachian Spring, a 1944 ballet with music by Aaron Copland and choreography by Martha Graham. Over six days, they were given small snippets of music from the original score, and in small groups, expanded this to create music of their own. Most of the people participating in the project - including Amy - had never really composed music before, but they were joined by several members of the Adelaide Symphony Orchestra who provided us with invaluable advice and helped the participants to expand their skills.

The project culminated with a concert at Elder Hall showcasing the work. The group were joined by thirteen members of the Adelaide Symphony Orchestra who played the original score alongside the new music. In total, they composed about twenty minutes of original music, which amazingly, they managed to perform by memory - another thing most of the students had never done before. The inclusion of dance was a new one this year, and they had an interesting time combining music and dance.

In Amy’s own words, "I know I speak for everyone involved when I say that we all enjoyed ourselves immensely. I know that I personally greatly improved my previously practically-non-existent composing skills and gained a fascinating insight into how a professional orchestra works and rehearses". Congratulations Amy.

Records set at the 2019 Athletics Carnival.

Congratulations to the following students on their achievements at the recent Secondary School Sport SA Swimming event.