The Art of Self Reflection

What better cause for reflection, then a good conversation about self-reflection, and indeed what better time to do it then the end of a term. Today I found myself by design in the midst of a great conversation around learning environments with two experts in the field. One an expert in coach development and one an expert in teacher development, both fantastic facilitators and huge advocates of self reflection. From time to time we are presented with challenging situations where we receive challenging feedback. Feedback that makes us stiffen up, want to defend ourselves or justify our actions, and sometimes even make excuses for why we acted or did things the way we did. At times it is even common place to look for others to blame, maybe justifiably but not constructively. At times this fixed mindset robs us on the chance to self reflect and ask some very simple but important questions.

Failing to ask ourselves these simple questions robs us of the ability to improve, to really learn from a situation, no matter how good or poor the outcome. We are faced with these questions in a sporting context on a regular basis on the field, but off the field is just as important. There is another saying I love to quote which is something like this, "A good day is a good day , but a bad day is the best lesson". Yes we can learn from our successes for sure, but there is something about failing that can really spur us forward to improvement but only if we are willing to look at and examine it. As a coach I’ve had many successes, one was last week, and many failings, one that happened this week. I learnt much more from the failure because it forced me to self reflect on my own process and delivery and to challenge myself to be better. Now to the outsider my failure would probably not look like a failure, and to the athletes, well I’d be surprised if they noticed any difference between a regular session, but to my own standards, I knew I hadn’t delivered what I was capable of. So first I got a little annoyed, followed by determined and now I’m already planning how I will improve. Imagine if I can just swept it away as not my best, but it will be better tomorrow, end of thought train. Or just stayed complacent, that it was ok and ok was good enough. What if I looked to blame, well half the athletes were late to the session, a key player was missing... Or what if even worse, I decided that I’m good enough already , and everything I do is good, because I’m an Olympic Coach and that’s enough, no more room to improve? Zero self reflection, zero chance to analyse, zero change of improving. In sport just as in life, the game is always moving forward, so if we stay still and complacent in our thoughts, or accepting of mediocre, we run the risk of being left behind.

As the SANFL season draws to a close, the question for Port will be, what can you learn from this failure, what could you have done better and how will you do it?

And for Glenelg, once the celebrations have died down and the hype has disappeared, will you settle for what’s been done today, or will you analyse, learn, grow and improve again?

The question for us might be the same, what have we done this term well, what could we improve on, and how will we do it?

Starting with the talk of the town, the SANFL grand final. Unless you have been in hiding, I’m sure you have heard the news or seen the headlines that Glenelg was successful in breaking a 33 year drought and defeating Port for the premiership. What you may or may not know of is that Westminster’s very own Year 9 football coach and Magarey medal winner, Luke Partington played a critical role in the team, as did Westminster Old Scholar, Andrew Bradley ('09). A huge congratulations from the Westminster family.

Lots of news out of the Prep School this week with our students competing in a multitude of competitions.

Jazz represented SA at the School Sport Australian 12 and Under National Netball Championships in Canberra. This was a great achievement for Jazz who is only 11 and is still eligible to play in this team next year. SA took out the Silver medal. The manager informed me that Jazz played very well throughout the week in Centre and Wing Defence, with the highlight beating QLD by 1 goal following an intercept from Jazz with 20 seconds to go, saving the day. SA defeated every team in the tournament and only 2 points separated SA and QLD for Gold. 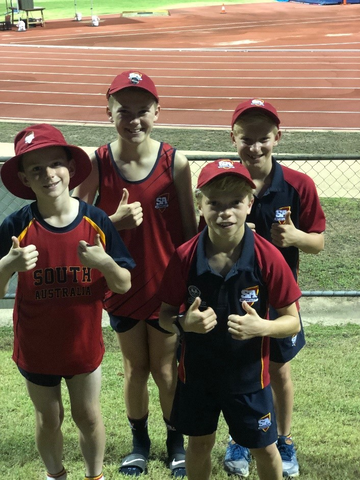 Westminster had six students represent SA at the School Sport Under 12 Australian National Athletics Championships in Darwin. In hot and humid conditions our students have had a great experience.

Their results are as follows:

Gerard McGinley and Tim Alver also competed in a number of events and Adelle Parkinson-Need was selected to compete but had to withdraw because she had two grand finals in Adelaide at the same time.

Westminster had six students represent SA at the School Sport Australian National Cross Country Championships in NSW. Our students ran some great times with personal best performances over the four days of competition.

Yours in High Performance,