By now you should be thinking strategically about who will make up your amazing four players for our Golf Day.

Friday 5 April at The Vines; 12 noon tee off, includes a light lunch from 11.00 am, a day on the green, including drinks.

You are welcome to stay for the casual dinner and presentations. 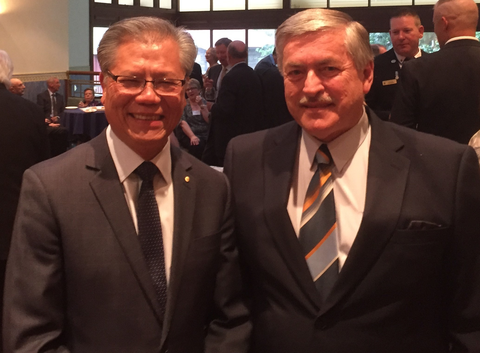 We congratulate Dr Phil Glatz (’66) who recently was awarded the Australian Poultry Award and received a UNESCO award, presented by his Excellency the Honourable Hieu Van Le AC, Governor of South Australia.

After Westminster Phil returned to the Riverland to run his family poultry farm and in the ensuing years undertook a PhD while working for SARDI at Roseworthy.

Over the latter stages of his career, Phil became heavily involved in developing countries. The following release from SARDI sums up Phil’s significant contribution to the global livestock industry:

I'm pleased to advise that former SARDI researcher Dr Phil Glatz has been recognised for his work in the livestock industry and was presented with a UNESCO Clubs Adelaide Achievement Award.

Governor of South Australia Honourable Hieu Van Le presented Dr Glatz with the award at a special ceremony on 30 October, 2018.

The award was for outstanding achievement during 40 years of collaborative research in the livestock industry, of bettering the lives of smallholder farms in developing countries by improving practices, production and food security.

During his time at SARDI, Dr Glatz played an integral role in the poultry industry and is recognised as a world authority on beak trimming and a national authority on poultry and ratite welfare, husbandry, production systems and quality assurance programs.

Over his career, Dr Glatz was a principal investigator for more than 60 projects. He edited two text books, authored five training manuals, 11 book chapters, 48 journal papers, 111 conference papers and 75 other reports for the poultry, pig and ratite industries.

The livestock industry, locally, nationally and globally, has been positively influenced by Dr Glatz's research. Dr Glatz provided his expertise in developing countries, being actively involved in training and mentoring. The assistance and advice he provided to assist local livestock industries flourish was always highly regarded and is still being sought today.

The Class of 2009 10 Year Reunion Dinner is being held at Westminster, 7.00 pm Friday 15 March in the David Jarman Room. We have emailed invitations and posted invitations to those who have a valid address.

The Class of 2014 5 Year Reunion is a cocktail-styled party here at Westminster, 7.00 pm Friday 29 March in the David Jarman Room. This event is being circulated by online invitation so don’t forget to spread the word!

These events can be booked through Trybooking.

And don’t forget Westminster’s Fun Fair is on Saturday 23 March, 9.00 am to 3.00 pm on the Preparatory School Oval – one of the biggest gatherings of the Westminster community in our annual calendar!