What a busy week!

Tuesday last week was an amazing day in the Prep School. As well as continuing with swimming lessons at the pool, we had 54 students from Years 3 to 7 head to SANTOS stadium to compete in the District Athletics Carnival. Not only did they compete, but the Westminster team won the championship - for the fourth year in a row! An amazing effort by the team and so many individual students.

As if that wasn't enough excitement, on Tuesday evening the Prep School Showcase event was performed to a capacity crowd in the MMC. Many of our musical students were athletes earlier in the day. At the concert we had students form Year 1 to Year 6 perform in the various choir and musical ensembles from across the school. It was an amazing celebration of music and so many students were in multiple groups. Two of our Year 12 students Emily Nolis and Josh Gomez were wonderful comperes and other Year 11 and 12 students handled the lighting and video linking. It was an amazing evening.

Congratulations to all students and staff who were involved in either or both events.

The Athletics competition saw teams from 15 schools in our district compete for the South West District Athletics Championship at SANTOS stadium. Our team was extremely well organised and finished the day winning the large schools competition with 409 points, well clear of Paringa Park Primary in second position on 153 points and Glenelg Primary third on 146. When full details emerge, I expect a number of our students will go on to represent the district at State Athletics Day later this term.

To conclude two weeks of Aquatics lessons at the pool, the students in Years 3 to 6 represented their House in a series of races in our annual Swimming Carnival. The weather outside was very ordinary but, in a rare upside to COVID-19 concessions, the fact that we were unable to have parents present as spectators meant that we had room to marshal all swimmers indoors and keep them out of the brisk weather. Children competed individually in breastroke, freestyle, backstroke and butterfly events. House relay teams were also formed and the competition was fierce. Our carnival provided a great opportunity for the children who put in hours of training in the pool to showcase their talents, but also an opportunity for children who don’t find swimming easy to give their best effort to help their House. One of the final events for the day was the 100m individual medley, where swimmers performed a lap of each of the four strokes. Poppy Doyle (Year 6 Crown) won this gruelling event with Axel Tucker (Year 6 Wyvern) second and Jordan Tucker (Year 5 Wyvern) third.

A number of students excelled in the pool, and congratulations must go to the individual medallists listed below.

The outcome was 13 years in the making with Charter House the victorious team for the first time since 2008, closely followed by Wesley and Crown. 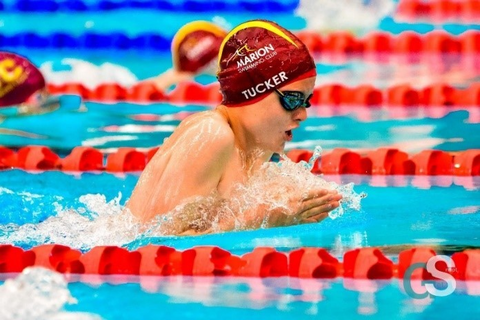 Congratulations to the Tucker boys who had great success at the SA State Swimming Championships on Saturday 26 and Sunday 27 September. Zachary Tucker (Year 8 Clark) won the bronze medal in the 200m individual medley and also won bronze in the 400 metres freestyle. Axel Tucker (Year 6 Wyvern) won the silver medal in the 50m breaststroke, silver in the 100m breaststroke (pictured) and silver in 200m individual medley. Jordan Tucker (Year 5 Wyvern) came away with personal best times in every race, but as he was younger than his competitors he will have the chance to add to the family medal haul in the same events again in 2021.

Throughout the year we have students who elect to participate in the University of New South Wales ICAS assessment competitions. Recently we have received the results of the Mathematics and Spelling Bee competitions. We had 38 students participate in Mathematics and were awarded two High Distinctions, six Distinctions, thirteen Credits and four Merits.

We had 23 students participate in the Spelling Bee and were awarded one High Distinction, five Distinctions, four Credits and three Merits.

As the new school year is rapidly approaching, we are busy planning for what looks to be a busy and exciting 2021. We are particularly looking forward to welcoming our new students who will be commencing in Years 1 to 6, to our Orientation Day on Friday 4 December

For existing Westminster students, dress is full summer uniform, including hat and for students new to Westminster, neat, casual attire with a hat and shoes suitable to run around in. All students are asked to bring their recess, lunch, and a filled water bottle.

Students will go to class as normal and spend a day getting to know their future classmates. Later in the day they will spend time with their 2021 class teacher. This will mean that they will not only know their teacher for next year, but also who their classmates will be. Hopefully, this will assist them to enjoy their Christmas holidays rather than worrying about the unknown in changing schools. Our day concludes at 3.30pm and new children can be collected from the Vandepeer Courtyard (outside the Prep School Office).

Our aim is to make the day as enjoyable and ‘stress free’ as possible for students.

Certificate Ceremony won’t be the same

Traditionally we have concluded each year with a Certificate Ceremony that has enabled all students to be involved in an assembly in the Michael Murray Centre and during the event receive a certificate that signifies their completion of the school year. As with many of our regular school milestones, this ceremony will need to take on a different format this year. While all students will still receive a certificate, our ceremony this year on Tuesday 8 December will be exclusively for the Year 6 students as well as their parents. Other students will not be in attendance at the assembly but they will still receive their certificates. Year 6 families will receive more information about these arrangements as the end of term nears.

Our Nativity will also be different

Last term our classes began to prepare for our annual Junior Primary Nativity night, which will be held on Thursday 3 December. This year we will be required to modify this special night to adhere with current restrictions. At this stage, it looks as though we will be holding two special performances. One performance for Transition, Reception and Year 1 families (two tickets per family) and one performance for our Year 2 families (five tickets per family). We hope this will enable families to enjoy this special event whilst adhering to strict number restrictions. These two performances will be on Thursday 3 December at 2.00 pm (Transition, Reception and Year 1 Parents) and 6.00 pm (Year 2 families). These events will be followed by an outdoor Westminster Carols night on our beautiful main oval. More details regarding this special event will be announced shortly. If you have some sewing or costuming skills and would like to support a small team of helpers to prepare for this exciting event, please see your child’s classroom teacher. Any support in this area would be greatly appreciated.

During Term 2, students in Reception to Year 2, as well as Year 5 and 6 students, entered a Premier’s Reading Challenge competition which involved reading a STEM related book from the PRC.

Reception to Year 2 students listened to a picture book during their library lesson and created their own drawing linked to the topics discussed in the book. Year 5 students were asked to design an invention based on something from the book they read. This was set as a homework task. Similarly, the Year 6 homework task to fit the competition criteria was to design a poster which highlighted the STEM features of their chosen book.

During a recent Assembly, Mr Mark A. Williams, Manager of Premier’s Challenges shared some exciting news. Unfortunately, there were no winners in the R-2 category, but in the Year 5 competition three students inspired by the book ‘Bouncing Back: An Eastern Barred Bandicoot Story’ by Rohan Cleave and Coral Tulloch were awarded for their efforts. Joint runners-up were Eden Gannon (Year 5 Charter) with her invention of a robot cassowary and Sterling Gianni (Year 5 Charter) with his design for a rubbish cleaning submarine. Christina Zhang (Year 5 Wyvern) won first prize. She was congratulated for her creative ‘shark tracking’ invention.

In the Year 6-9 category, Westminster had another three prize winners. Janet Wang (Year 6 Abbey) was awarded a runner-up prize after being inspired by the book ‘The Little Corroboree Frog’ by Tracey Holton-Ramirez. Janet’s poster was full of information about the life cycle of the emperor penguin. There were two winners who were both inspired by the true story of William Kamkwamba. His story detailed in ‘The Boy Who Harnessed the Wind’ tells how Kamkwamba invented a windmill in his teen years to aid the extreme famine in his hometown of Malawi. Kate Daniel (Year 6 Wyvern) was rewarded for her wonderful moving windmill power poster which she based around the quote, ‘knowledge is power’, and Adelle Parkinson-Need (Year 6 Abbey) also made a creative winning poster informing us about up-cycling.

Congratulations to our runners-up who were presented with a certificate, book and Dymocks gift card, and to our winners who also received the added bonus of a family pass to the Adelaide Zoo. All students who entered the competition received a participation certificate.

As Teacher Librarian, I was pleased with the interest that the competition generated. Students discussed the STEM related themes in the various books read (a different title with each class) and some students went on to read more books on their topic to extend their knowledge. Overall, the experience was a positive way to continue promoting reading as well as creative and critical thinking. Mark (Manager of Premier’s Challenges) was also pleased with Westminster’s entries, all 249 of them, and has written a piece for the PRC newly designed website: https://premiersreadingchallenge.sa.edu.au/2020/11/02/stem-space-competition-2-2/

Week 2 of this term saw students celebrating the previously postponed Children’s Book Council of Australia’s Book Week with the theme, ‘Curious Creatures, Wild Minds’. After reading the picture book, ‘Monsters are’ by Sara Gibbs, students in Reception and 1W collaged, coloured and used ink stamps to create a ‘curious creature’ to add to our wonderful Library tree made by Miss Sears, our talented Library Assistant.

In Year 3 and 2M, students listened to the classic picture book, ‘Where the Wild Things Are’ by Maurice Sendak and designed their own ‘Wild Thing’. Inspired by the grateful main character in the honourable mention picture book, ‘Three’ by Stephen Michael King, students in Year 4 wrote three things that they are grateful for. Their writing was attached to a wooden heart that they decorated. Finally, after looking at the honourable mention non-fiction book ‘The illustrated encyclopaedia of ugly animals’ by Sami Bayly, Year 5 students have had great fun creating an ugly animal. This book has already proved to be a huge favourite with students and I am sure everyone will enjoy looking at the amazing, and ugly, animals on display

A special mention, and thank you, to Ms Morisset and Mrs Papst for producing a fun display made up of lots of dachshunds to accompany the winning Early Childhood picture book, “My Friend Fred’ by Frances Watts and A. Yi. Their Transition students each drew, coloured and named their own dachshund.

After voting for their favourite book from a shortlist of six, Book Week provided students with the opportunity to finally compare their own choice and the Westminster winning books with the books chosen as winners by the official CBCA judges. Students were excited, amazed, and sometimes dismayed, with the choices made by the judges. More discussions took place during Library lessons about the winning books based on many questions of ‘why’ and ‘why not’ as students continued to appreciate the work of some of our talented Australian authors and illustrators.

For information about the Children’s Book Council of Australia please take a look at their website; https://cbca.org.au/